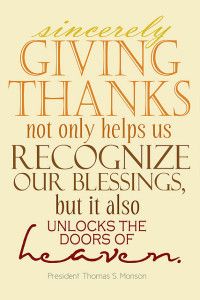 Do you want to know what it feels like to be in heaven? If so, here’s how.

Enter into His gates with thanksgiving,
And into His courts with praise.
Be thankful to Him, and bless His name.

We all have the ability to enter heaven’s gates using the key of thanksgiving.

Our limited science understanding has recognized that there are at least ten dimensions. Therefore, it stands to reason that we do indeed have the ability to be in two places at once. We can physically be here on earth in one dimension and spiritually in heaven in another.

When we offer up our thanks to God we are mysteriously transported through heaven’s gates and into His presence. Test it out for yourself. Think of things you are thankful for and tell God about it. Thank Him for those things. Once you get started, it’s hard to stop. Being thankful for one things leads to another. Before you know it, you’ve spent time with the King, telling him about things that you appreciate and recognize ultimately came from Him.

Worthy are you, our Lord and God, to receive glory and honor and power, for you created all things, and by your will they existed and were created. Revelation 4:11

To the King of ages, immortal, invisible, the only God, be honor and glory forever and ever. Amen. 1 Timothy 1:17

Blessing and glory and wisdom and thanksgiving and honor and power and might be to our God forever and ever! Amen. Revelation 7:12

Is being thankful tough for you right now? Are you going through a trial? If life is especially difficult, you have a unique opportunity to offer a special sacrifice of thanksgiving to God. It is not easy to focus on what you are thankful for when your going through a tough time. It can be a difficult sacrifice to offer. However, the bible tells us we glorify God when we thank Him.

The one who offers thanksgiving as his sacrifice glorifies me; to one who orders his way rightly I will show the salvation of God! Psalm 50:23

Being thankful in a trial will help you get through it. Jesus promised in this life we will go through trials. But he said he would never leave us nor foresake us. More then that, He goes through our trials with us as illustrated in the bible in Daniel chapter 3.

24 Then King Nebuchadnezzar was astonished; and he rose in haste and spoke, saying to his counselors, “Did we not cast three men bound into the midst of the fire?”

They answered and said to the king, “True, O king.”

25 “Look!” he answered, “I see four men loose, walking in the midst of the fire; and they are not hurt, and the form of the fourth is like the Son of God.”

Then Shadrach, Meshach, and Abed-Nego came from the midst of the fire. 27 And the satraps, administrators, governors, and the king’s counselors gathered together, and they saw these men on whose bodies the fire had no power; the hair of their head was not singed nor were their garments affected, and the smell of fire was not on them.

28 Nebuchadnezzar spoke, saying, “Blessed be the God of Shadrach, Meshach, and Abed-Nego, who sent His Angel and delivered His servants who trusted in Him, and they have frustrated the king’s word, and yielded their bodies, that they should not serve nor worship any god except their own God! 29 Therefore I make a decree that any people, nation, or language which speaks anything amiss against the God of Shadrach, Meshach, and Abed-Nego shall be cut in pieces, and their houses shall be made an ash heap; because there is no other God who can deliver like this.”

30 Then the king promoted Shadrach, Meshach, and Abed-Nego in the province of Babylon.