The Lord has given me a burden for the women of Haiti and serving at Cross to Light. The Lord has opened doors to minister to the women by loving them and sharing God’s word with them. My desire is that they know who the Lord is and that they know who they are in the Lord, as they grow in the grace and the knowledge of the Lord Jesus through His word. 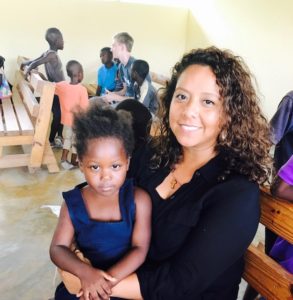 Sometimes the opportunity to love and minister to the women comes through Sunday evening women’s bible study at the Amphitheater, Women’s prison ministry, spending time with our neighbors and their children, or visiting the women at our Cross to Light church plants. For example on Wednesday, July 19, the opportunity to minister to a precious lady came while we visited Pastor Lisson’s church with a visiting team from CC Fredericksburg. The team blessed the Church with VBS, a Men’s study and Women’s study. We shared the gospel and we prayed for those that wanted individual prayer. We had plenty of time to stay and pray because on the way up the mountain to pastor Lisson’s the Tap Tap got a flat, but it turned out to be a blessing because we prayed with everyone that came up to us.

On the way down the mountain, we were told that there was an older lady that was a disciple of a voodoo priest, who wanted to give her life to the Lord. So we went to her. She was frail, unable to get up, and lying on a sheet on the dirt outside her home. Pastor Lisson shared Jesus with her and led her in prayer as she surrendered her life to the Living God. We laid hands on her and prayed for her. Barbie, one of the sisters on the team, hugged her and held her, and helped her up. The women lifted her hands and shouted “Hallelujah! Hallelujah! Hallelujah!”. She was then helped as she was bathed and changed into new clothes. This woman, who was a disciple of satan is now a Daughter of the King of Kings. The One who made her in His image, is now her Father. I am amazed at the power of the Gospel of Jesus Christ.

As we were leaving, I noticed a beautiful flower growing out of dirt. This is what the Lord does with us. Isaiah 61:3 says that He gives beauty for ashes. The ministry of Jesus Christ was to set the captives free, and that’s what He did to this women. He set her free. She no longer is a slave to sin, but a slave to righteousness. Hallelujah! As I have served at Cross to Light, the Lord has allowed me to witness His Spirit move in power. He reminds me that He has allowed me to be part of something that is much greater than myself, and it is truly a privilege. To God be the Glory!