Deprecated: Function create_function() is deprecated in /var/www/vhosts/crosstolight.com/httpdocs/wp-content/plugins/wp-spamshield/wp-spamshield.php on line 2033

“This one’s for free,” he whispered just before driving the big water truck back out of the gate. 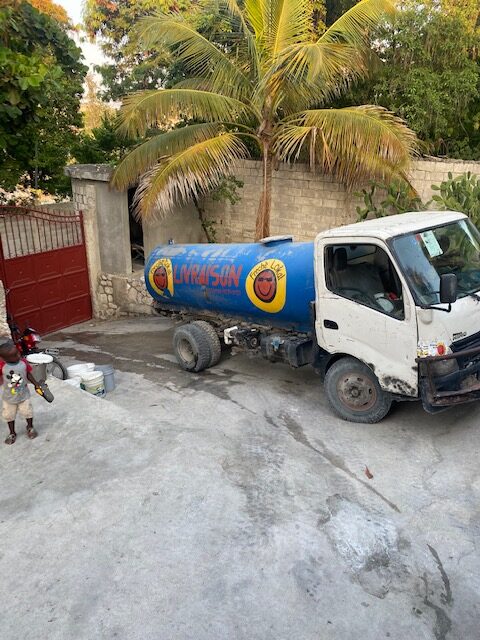 Brian and Watson planned to use the Haiti Bible Training Center’s well water for drinking. The purified drinking water tank was almost empty. A church building team was there busy working and would need drinking water.

On an island, even the best well water usually has some salt in it. Our Culligan filter does a good job, but everyone still prefers the purified water trucked in to drink.

No other trucks were on the street. The gas stations were still closed down. The government reduced the working week down to three days because hardly anyone can drive anywhere.

Watson called the water company to find out how much we owed for the water truck and to thank them for coming out just before we were empty. The person at the water company said nothing was on record and we didn’t owe anything. He further explained it was impossible because no trucks had gone out. Their gate’s locked. No water orders are delivered.

There’s no other water company. The truck that delivered the water couldn’t have come from anywhere else. Puzzled, Watson hung up the phone and declared an angel must have provided the water. Thinking back, this makes a lot of sense. The driver took no recognition. He was anonymous.

He had pulled up to the gate and honked, “wonk, wonk!”. He pulled in and filled the tank quickly. Whispered, “this one’s for free,” and pulled out. Brian thought he must have put in a small amount of water because of how fast he was. Not so. He had filled the 1,500-gallon water tank to the top.

The neighbors had seen the miracle water truck pull in and out. They were ready with their gallon buckets. Thirsty and dirty, having gone without water for too long. We turned on the spigot that’s made for sharing water with the neighbors. They came and got bucket after bucket.